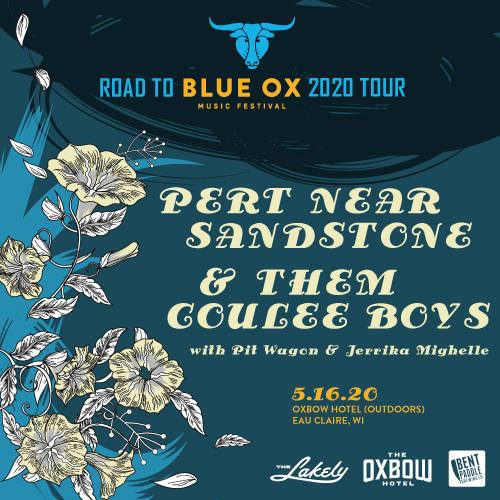 Join Pert Near Sandstone and Them Coulee Boys on the Road to Blue Ox! Each spring leading up to the festival the host band of The Blue Ox Music Festival gathers their friends together to spread the spirit of the festival throughout the Midwest. This year they are bringing hometown favorites Them Coulee Boys along with to The Oxbow Hotel’s Blue Ox Pre-Party for a very special evening.

Come hang out at The Oxbow Hotel and The Lakely on Saturday, May 16th for an outdoor experience of music, food, drinks and of course, tons of fun!

This event is sponsored by Bent Paddle Brewing Co.

BIOS:
Pert Near Sandstone
It was roughly a decade ago that Pert Near Sandstone first gathered around a microphone in a Minneapolis basement to record their debut album, ‘Up And Down The River.’ So much has happened since then: highs and lows, personal struggles and artistic triumphs, new faces and new sounds. The winding road they’ve traveled over the years makes it all the more meaningful for the band to come full circle on their dazzling new release, ‘Discovery Of Honey,’ which finds them once again recording in a basement and reuniting with founding member Ryan Young, who’s spent the past seven years touring the world playing fiddle with bluegrass stars Trampled By Turtles.

“Besides playing with us, Ryan was also our first recording engineer back when we were just starting out,” says mandolin/fiddle player Nate Sipe. “Working with him again on the new album, we were able to recapture that feeling of lightning in a bottle from the early days.”

“We all learned how to do this together,” adds banjo player Kevin Kniebel. “We have more tools in our kit now and we’ve evolved as musicians and songwriters, but what hasn’t changed is the chemistry between us.”

That chemistry has been abundantly clear from the very first days of Pert Near Sandstone, when the band—whose current lineup features Sipe and Kniebel, founding guitarist J Lenz, bassist Justin Bruhn, and clog & fiddle player Matt Cartier—burst onto the American roots music scene in a flurry of fiddling, picking, and stomping. They followed their debut record with a string of four critically acclaimed albums that had No Depression hailing them as “stellar” and The Minneapolis Star Tribune praising their songs as “masterfully and jubilantly plucked.” NPR’s Mountain Stage celebrated the band’s “Midwestern stamp on Appalachian [sounds],” while The Current described their live performances as “a frenzied string shredding spree that takes audiences under its spell.”

The band earned performances everywhere from the prestigious Telluride Bluegrass Festival to A Prairie Home Companion, and shared bills on the road with the likes of Trampled By Turtles, Del McCoury, and Yonder Mountain String Band. As their reputation grew, they cemented their status as linchpins of the Midwestern scene by founding their very own festival, Blue Ox, which has featured performances by Bela Fleck, Preservation Hall Jazz Band, Shovels & Rope, Justin Townes Earle, Blitzen Trapper, and more.

“People get really wrapped up in genre and labeling,” explains Kniebel, “but Blue Ox allows us to showcase all these different aspects of roots and American music that are really important to us and to the fabric of folk music today.”

“Whether you have drums and an electric guitar or a jug and a fiddle, it’s all part of the same voice,” adds Sipe. “It’s a blessing to be able to present a festival that can incorporate all of those elements.”

That same voracious musical appetite and disregard for the strictures of genre and tradition fuel much the music on ‘Discovery Of Honey,’ which finds the band setting their sights higher than ever before and pushing the complexity of their songwriting and the sheer energy of their performances to remarkable new peaks. With Young back in the fold recording and co-producing, the band gathered just outside of Minneapolis at their old friend’s new home—which had originally been constructed by an end-times prepper to withstand a nuclear apocalypse—for the recording sessions.

“There’s a huge ham radio tower in the back and catacombs of rooms with storage for cans and everything,” explains Sipe. “The two-foot-thick concrete walls of the bomb shelter had a 1-inch iron plate in the middle, and when they were wiring up the house, the electrician couldn’t even get through it at first.”

It proved to be the perfect mix of seclusion and comfort, with the basement serving as both a familiar setting and an ideal place for Pert Near Sandstone to unleash their explosion of string band energy and excitement. Sitting in a circle and performing live together, they knocked out basic tracking for the album in just two-and-a-half days. Over the following weeks, they’d revisit the songs individually, cutting vocals and solos and experimenting with layering up additional sounds to flesh out the rich, acoustic orchestration.

The album kicks off with the stately “Bloom Again,” a Kniebel-penned track about the fragility and beauty of love. Propelled by clawhammer banjo and tremolo mandolin, the track features rich, triumphant harmonies and rides on a wave of ethereal organ swells, showing off the folkier side of the band’s personality. They follow it up with a trip to the opposite end of the spectrum on the rollicking, rag-time, jugband-inspired “Nothing I Can Do,” from which the album draws its title.

“‘Discovery Of Honey’ really encapsulated the overall theme of the record,” says Sipe. “A lot of the songs are about finding a new fertile ground, about approaching love for the first time again.”

Indeed, several of the tracks (including Kniebel’s “Uncover Me” and Sipe’s “Again And Again”) look at old love in new ways, but the album covers a broad spectrum, both musically and thematically. “Rattlesnake” is a breakneck fiddle-tune inspired by Sipe’s relocation to southern California and his forays into the desert, while the toe-tapping “Bay Road” came to him during a solo retreat to a family cabin in central Minnesota, and “Don’t Need You” is a fingerstyle blues written by Lenz in the tradition of Charlie Parr or Spider John Koerner. In addition, Bruhn contributed his first writing credits on the album with “Animal Instinct” and “Biting My Nails,” an unplanned recording that found the band pushing themselves to experiment with detuning their instruments and layering on unexpected sounds like pedal steel guitar.

That musical fearlessness is part of what makes the group so difficult to pin down and also such perfect stewards for string band music in the 21st century. The sweetest honey awaits those brave enough to risk being stung, and the band reaps the rewards of their musical courage here in spades. ‘Discovery Of Honey’ is Pert Near Sandstone’s finest work to date, and that’s buzz you can believe in.

Allegedly founded at a bible camp, and born in the back valleys of Western Wisconsin, Them Coulee Boys craft a brand of Americana that blends punk, bluegrass, and rock & roll. Somewhere underneath the energy, the exuberance, the wit, and the passion of Them Coulee Boys lies a heart. It’s a heart filled with sincerity, honesty, and the will to make the world a better place. This heart is not only evident in every song, but also in Them Coulee Boys as a whole. These songs are meant for dancing, for excitement, but are also for thought, and for the quiet moments. Them Coulee Boys seek to balance the high with the low, the happy with the sad, and the love with pain. It’s how we live our lives, and they make music that reflects that.

Founded in late 2013, Them Coulee Boys have quickly become a force on the Midwest music scene. Soren Staff, Beau Janke, Jens Staff, Neil Krause, and Patrick Phalen IV work together as a well-oiled alt-folk machine to craft songs and live shows that have impressed audiences nationwide.

In the winter of 2018, Them Coulee Boys set to capture a new sound. They gathered at the famed Pachyderm Studios (Nirvana, Son Volt, PJ Harvey) in Cannon Falls, MN to record with their friend Dave Simonett (Trampled By Turtles). Their as of yet untitled record builds on their ever evolving sound, while capturing the live element Them Coulee Boys are known for. The album is framed as a journey of sorts, starting in a volatile place, and ending in acceptance. This is the sound of a band that has grown into the sound they’ve been working towards, while keeping the sincerity they built themselves on. Look for their new record in 2019.

Them Coulee Boys have had the pleasure of sharing the stage with some incredible acts including: John Fogerty (of Creedence Clearwater Revival), Trampled By Turtles, Sam Bush, Yonder Mountain String Band, Pert Near Sandstone, Horseshoes & Hand Grenades, Fruition, and many more.