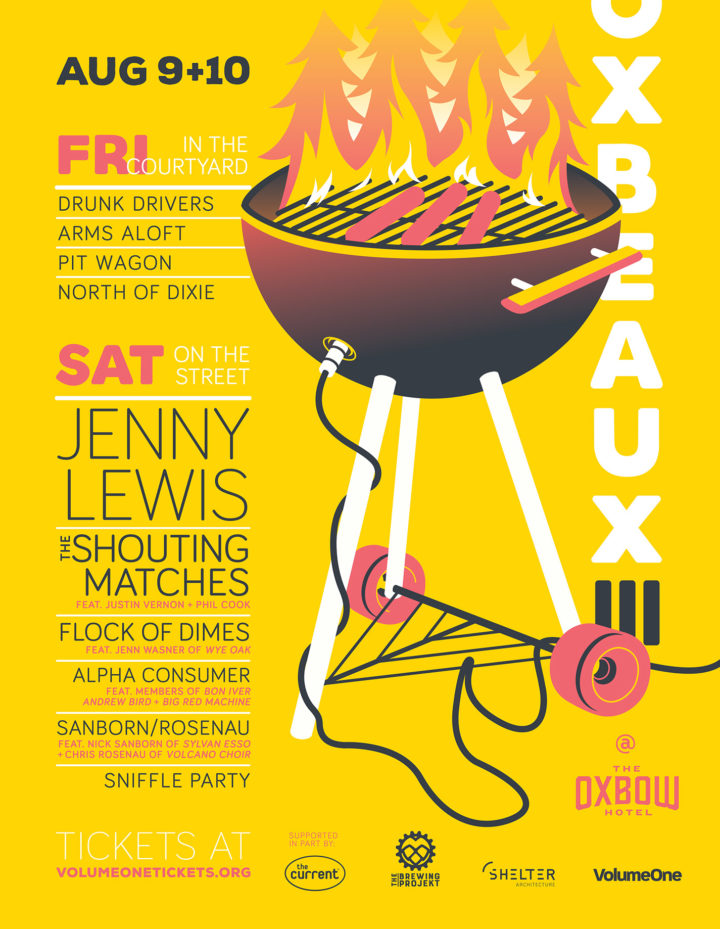 The Oxbow Hotel is thrilled to host OXBEAUX III, a unique outdoor music experience in the heart of the city. There will be beer, cocktails, soda and food-a-plenty! A limited number of hotel rooms are available for those looking for a full experience.

The event is sponsored by The Brewing Projekt, Shelter Architecture, 89.3 The Current and Volume One.

Jenny Lewis is a singer-songwriter from Las Vegas, Nevada, US. She was the primary vocalist of now defunct indie rock band Rilo Kiley before embarking on a successful solo career.

Born on January 8th 1976, Lewis started her professional career as an actress – her first role was in a Jell-O commercial! She went on to act in small roles on TV shows including Baywatch and The Golden Girls, and starred in many made-for-TV teen movies. Deciding that music was her true passion, Lewis formed indie band Rilo Kiley in 1998 with her friends Pierre De Reeder, Dave Rock and Blake Sennett. The band gained the attention of Warner Bros records who signed them for the release of their debut album “More Adventurous”, which was released in 2004. In July 2011, the band announced their split.

Lewis had been working on solo material whilst she was in Rilo Kiley and in 2004 she was invited by Conor Oberst (of the band Bright Eyes) to record a solo album on his record label Team Love. Her debut solo album “Rabbit Fur Coat” was released in January 2006 and showcased a different kind of sound for Lewis – she described the album herself as “a kind of soul record”. The album featured many guest appearances and contributions from other musicians, including Oberst, M Ward, James Valentine (guitarist of Maroon 5) and Ben Gibbard of Death Cab for Cutie.

Lewis’ third album “The Voyager” was released in 2014. The album took five years to complete and is a personal reflection on the break up Rilo Kiley and her father’s death. The lead single from the album “Just One of the Guys” was accompanied by a star-studded video, with appearances from Anne Hathaway, Kristen Stewart, Brie Larson and Tennessee Thomas.

As well as performing in Rilo Kiley and as a solo artist, Lewis performs as part of a duo with her boyfriend Johnathan Rice, under the apt name of Jenny and Johnny. The pair released their first single together in 2010 entitled “Scissor Runner”, followed by their album “I’m Having Fun Now”.

Jenny’s fourth solo album, ‘On The Line,’ is out now! Recorded at Capitol Records’ Studio B, On The Line boasts a backing band of incredible talent featuring Beck, Benmont Tench, Don Was, Jim Keltner, Ringo Starr and Ryan Adams.

Formed in Eau Claire, Wisconsin in 2006 by Bon Iver frontman Justin Vernon, Phil Cook of Megafaun, and Brian Moen of Peter Wolf Crier, the Shouting Matches specialize in a sort of low-key, roots-fueled blues-rock that owes more to Tom Petty than it does the lonesome, lovelorn indie folk of Vernon’s meal-ticket band. The trio released its debut album, Grownass Man, in April 2013. ~ James Christopher Monger, Rovi

Collaborative set from Chris Rosenau (Volcano Choir, Collections of Colonies of Bees) and Nick Sanborn (Sylvan Esso, Made of Oak)

Jenn Wasner launched Flock of Dimes, a solo project formed in 2011 to explore the more atmospheric side of pop. Flock of Dimes allows Wasner to experience more experimental recording techniques and songwriting outside of the burgeoning success of her main musical outlet Wye Oak.

Sniffle Party’s one-of-a-kind witchy pop music is a dream within a dream. The duo’s sleek and poignant songs were made in a bedroom in Eau Claire, Wisconsin, but contain multitudes. Serena Wagner’s distinctive songwriting and soul-stirring vocals paired with Eric Christenson’s dreamy, minimalist electronic production combine for a rich sound that’s fresh and invigorating. Where modern pop music generates a hollow kind of flawlessness, Sniffle Party thrives in the rough at the edges. Their lo-fi sincerity and heart-driven lyrics twist together into songs that pack an emotional punch that resonates.

Drunk Drivers are an absolute Eau Claire treasure. This band has been blasting their catchy, heavy rock tunes all over the Valley and beyond for over 20 years, and you can’t slow ’em down. The Drivers can out-rock almost anyone, and that’s why Chippewa Valley music lovers perennially rank them as one of the best rock bands around.

To better understand Arms Aloft you need to get to know their homeland, The Great Lakes. No no, not Chicago or Cleveland or Detroit, these punk weirdos are from THE NORTH. Half the band hails from Minneapolis and the other two lumberjacks are from Eau Claire, WI. Up in that neck of the woods the people wear large bricks of cheese upon their heads in a display of provincial unity. Ya sure, ya betcha. Well, these kids were destined for more than a life of ice-fishing and drinking Rhinelanders at the sawmill, so they started a band and caught people’s attention with their leftist message and raspy melodies.

Pit Wagon plays music for porch-sitters and sippers. With strings and voices, they share true stories that everybody knows—tough luck, rough nights, and rougher neighbors. Just like Wisconsin’s beer and cheese, their dirty country sound and lyrical folk wisdom leave a lasting and authentic aftertaste.

The beer-soaked songs of Eau Claire band Pit Wagon exist in the space where country, folk, and the blues all intersect. “It’s music made for porches,” said Matthew Vold, the primary songwriter for the band. The trio, made up of Vold (vocals and guitar), Matthew Mabis (a lot of banjo, some vocals, and a little bit of guitar), and Emily Jensen (vocals and the occasional kazoo solo), make music that puts their own youthful spin on traditions rooted in the tried-and-true, tale-spinning songs of old country, folk, and blues greats — the kind of songs that can make listeners laugh and cry in the same three minutes.

Not your daddy’s bluegrass! North of Dixie is electrified foot stompin’ music with a mix of old time, new grass and originals. So sit back, hold on to something and enjoy the ride!